Celebrating the Birth of Buddha

We recently visited our favorite Buddhist temple in San Jose, where they held a special event celebrating the birth of Buddha. For this occasion, a special glass container was displayed in front of the image of Buddha. Inside the container was a precious relic - a tiny fragment of Buddha's bones. 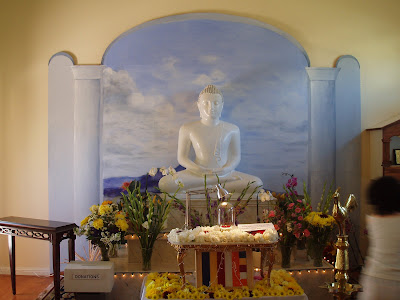 The monks at the temple explained to me that before he died, Buddha wished for parts of his body to remain intact even after his death. This was to help people remember him and his teachings. His wish came true, resulting in tiny bone fragments that remained even after his body was cremated. The relic on display at the temple was one of those fragments.

The Buddhist devotees at the temple took this opportunity to examine the relic up close and give respect to Buddha. We did the same. However, at the request of the monks, we did not take any photos of the relic. 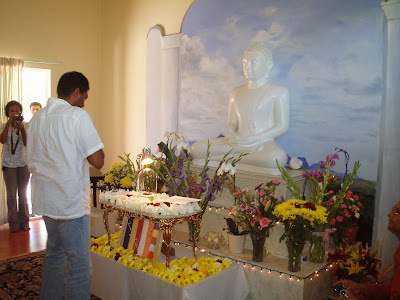 After taking a look at the relic, I engaged in an enlightening conversation with the temple's head monk, who is very friendly and knowledgeable. Among other things, he explained to me the Buddhist concept of God - which is very different from what I was taught, having been raised as a Catholic.

I also enjoyed a discussion with one of the devotees about how Buddhism has branched into different paths - some of which emphasize deep study and understanding of Buddha's teachings, while others emphasize more practical aspects such as doing good deeds.

Later that afternoon we were treated to some snacks and refreshments. Since the monks and devotees at the temple mostly come from Sri Lanka, we had a tasty Sri Lankan snack called kadala. It is a mixture of garbanzo beans, mustard seeds, curry leaves, and coconut. It is pleasantly spicy and chewy, and is served in paper cones: 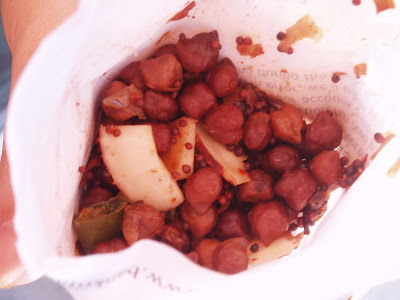 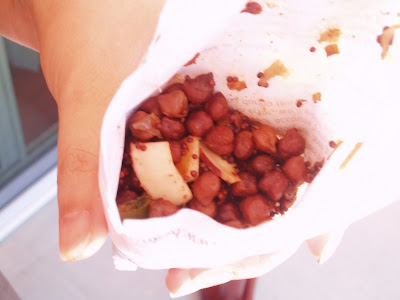 We also enjoyed a delicious drink made of rose syrup, basil seeds, pineapple, and water. Served chilled, it was very refreshing - a perfect drink for a hot afternoon: 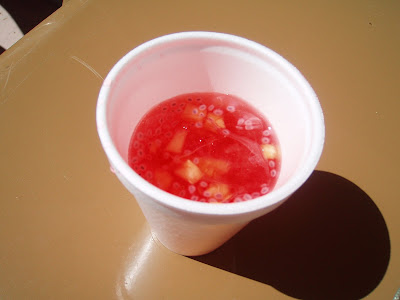 I am glad we made this visit to the temple. I gained a deeper understanding of Buddhism, and feel eager to learn more about it. We also got to experience a very tiny (but tasty) sample of Sri Lankan cuisine.
Posted by AsianFoodFanatic at 8:33 AM

Hi all,feeling pleasure to see your post with Birthday of Lord Buddha.I have to say some words.Right belief,right proposition,right living,right lead,right word,right considering,right exertions and right meditation are his eight fold path.He said that if anybody takes after this path,he will be far from the regular sufferings of life and living.He made individuals comprehend the genuine harmony in the middle of extravagance and asceticism and luxury and simplicity.Thank you.