There's a small slice of Japan in San Jose, on the corner of Saratoga and Moorpark Avenues (just off the I-280 freeway). There one finds a little mall that features a variety of shops that specialize in Japanese goods - like the Kinokuniya bookstore and the Mitsuwa Marketplace, as well as Japanese restaurants, and a Japanese video store.

I would sometimes spend many blissful hours immersed in the endless rows of manga (Japanese comics) and anime (Japanese cartoons) DVD's at Kinokuniya, and then swing by the food court at Mitsuwa for a quick bowl of udon (thick wheat noodles) or some other Japanese treat. 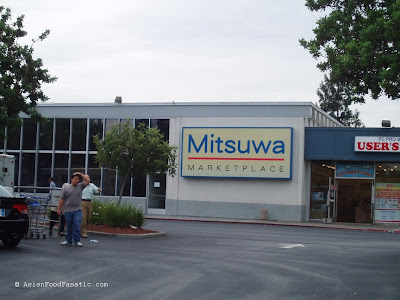 To me that's where the Mitsuwa Marketplace food court shines - as a convenient place to stop by for a quick, inexpensive bite of something authentically Japanese, whenever cravings for such goodies occur. It was precisely those cravings that drove us to Mitsuwa's food court for a quick lunch one fine afternoon.

Those in a big hurry can grab a bento (boxed lunch containing rice and meat), stick it in a microwave, and be on their way in snap. 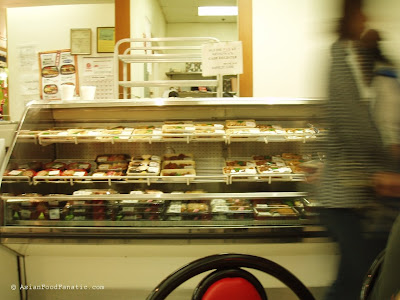 Others who prefer a more leisurely pace can get something cooked to order by Miyabi-Tei (the food court's vendor). The choices include: ramen (a Japanese noodle dish of Chinese origin), donburi (a big rice bowl topped with meat), tonkatsu (breaded deep fried pork cutlet), kare raisu (curry rice) and many others. 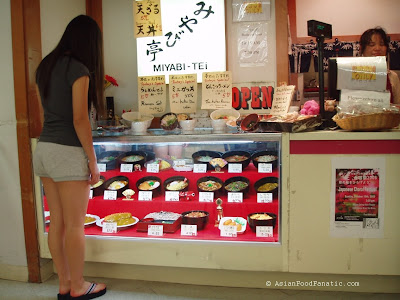 We definitely belonged to the more leisurely category. I haven't had udon in a while and was hankering for those thick, chewy noodles immersed in savory broth, so I ordered a bowl of beef udon: 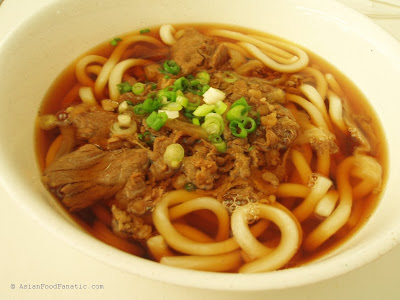 For me the real heart and soul of udon is the broth, and although Mitsuwa's broth was not as flavorful as that of other places, it was still okay. "What do you expect? This is fast food. It's good enough for that price" my wife astutely pointed out.

My wife had a box of assorted sushi. It was so-so. The rice wasn't as soft and fluffy as we would've liked but the overall result was still okay. My wife's earlier words rang true once again: "What do you expect?..." 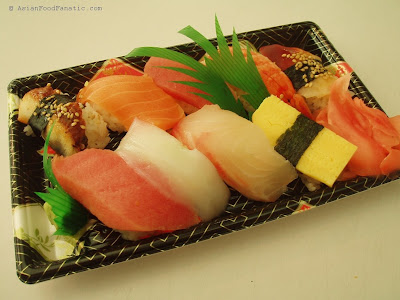 Still feeling hungry after my bowl of udon, I got an order of takoyaki (octopus balls). The outer portion of each ball was very soft and reminded me of marshmallows. Chewing diligently to the core of each ball revealed only a very small fragment of actual octopus meat, which kinda left me wanting more. (Everyone say it with me now: "What do you expect?...") 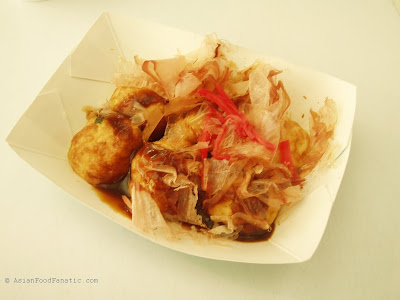 The most delightful part of the meal was an Okinawan dessert known as sata andagi, which are deep fried balls composed of egg, flour, and brown sugar. These were really delicious as the crust was delightully crunchy and the inside had a light, refreshing sweetness. 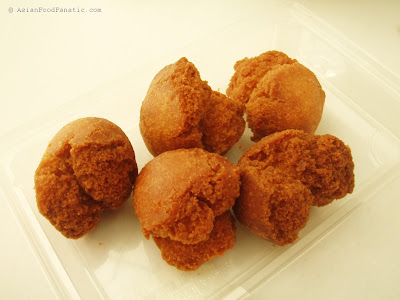 The sata andagi is made by the mom of one of the Miyabi-Tei employees, and only a limited quantity is sold each day. On a subsequent visit to Mitsuwa, we were not able to buy more sata andagi as it was sold out (reminds me of that time-honored marketing slogan: "Hurry, while supplies last!") People know a good thing when they taste it.

Posted by AsianFoodFanatic at 10:22 AM

You are so blessed to live in an area with such diversity of choice when it comes to food. I love Asian food but where I live there are only a few and they are only cheap imitations of the real thing. In fact, I was very surprised the last time I went to one and saw that the majority of the kitchen help were Mexican. I don't have anything against Mexicans at all, but it just seemed odd to me that they would be cooking Asian food. I would think that Asians could do it much better rather than a Mexican following a recipe!

Great blog and I love the pictures! I am so hungry!

Thanks for your comments. Yes, I feel really fortunate and grateful to live in this area with its awesome food choices.

The phenomenon you spoke of (Mexican cooks in Asian restaurants) sometimes happens here too. I went to a Panda Express one time and they had a Mexican cook. There is also a Mongolian Barbecue joint in one of our local malls that employs Mexican cooks. In both these cases, the food was pretty good. I guess it all boils down to the quality of training these folks receive.

Your blog is really good and it helps others. It's a perfect solution for those who search for it. Please share more information like this. butter chicken in Rajpura